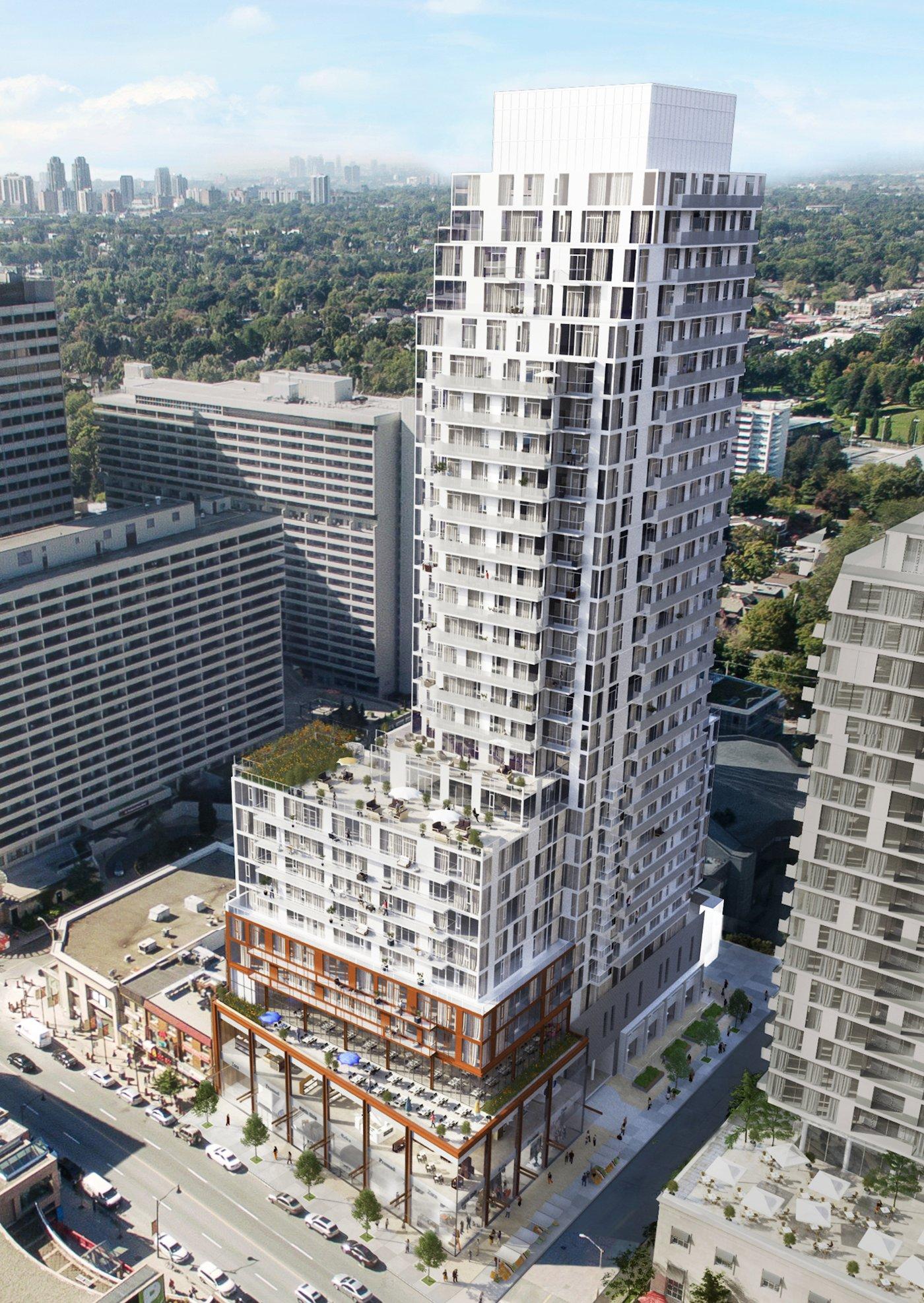 A new condominium is under construction at 2360 Yonge Street in Toronto, st the heart of Yonge/Eglinton — WhiteHaus Condo. The condominium, which is scheduled to be completed in 2019, is being developed by Lifetime Developments and Knightstone Capital Management Inc.

This project will rise 29 stories above-ground and will boast a total of 358 suites. WhiteHaus Condo will become the 2nd tallest residence in Lytton Park and the 213th tallest condominium in Toronto. Residents will have the luxury of enjoying a unique selection of amenities, such as; a resident lounge, a dog wash, an event kitchen, a fitness center, and more.

Outside of the WhiteHaus Condo, residents will also be able to choose from a vast selection of amenities. With a walk score of 98%, residents will be just moments away from all of their everyday needs. Nearby destinations will include Glebe Manor Square West, St. Clements-Yonge Parkette, and Lytton Park.

Whitehaus Condos will host several indoor amenities for the complete comfort of its’ residents. Amenities at the condominium will accommodate approximately  1,800 square feet of indoor space, with 1,125 square feet of outdoor amenity space included as well. Amenities that residents will be able to enjoy on the third floor will include a state of the art gym, an art studio, an event kitchen, and a spacious outdoor area with a dog run.  On the first floor of the Whitehaus Condos, residents will find a private room and a dog washing spa as well.

Amenities outside of the condominium are just as impressive. Whitehaus Condos’ prime location makes it easy for prospective residents to embrace all of the sights and businesses that Yonge & Eglinton has to offer. Surrounding the condominium is a great selection of restaurants, cafes, professional services, and shops.

For partygoers, there are a lot of nearby entertainment venues and hangout spots that are perfect with friends. Whitehaus Condo also makes it’s possible for families with children to send their kids to nearby schools, such as Northern Secondary, Hansa Language Centre, Eglinton Junior Public,  John Fisher Junior, and Ryerson & UT campus.

Residents at Whitehaus Condo will close to one of the latest transit hubs to enter Toronto, Yonge, and Eglinton. Prospective residents without private vehicles (or simply those who enjoy public transit) will find that getting around from the condo is extremely easy.  Whitehaus Condo has a walk and transit score of 98 and 93 respectively, making everything easily accessible to its residents.

Living in such a transit-friendly neighbourhood will no doubt make life much easier. Moments away is the Glinton TTC subway station, which will soon be joined by Eglinton Crosstown LRT. Several bus routes are also close to Whitehaus Condo, which connect to many of the principal arterial roads in the area. For cyclists, bicycle lanes are present on virtually all major thoroughfares. Private motorists will be able to access Highway 401 and the Don Valley Parkway with ease, making it easy for them to get around quickly.

There’s always something going on in this vibrant Toronto neighborhood to keep residents active. Whitehaus Condos offers exclusive opportunities for people to immerse themselves in the exhilarating and energetic atmosphere that the neighbourhood exudes. It’s no doubt that many people will revere your ability to call Whitehaus Condos home.

Whitehaus Condos was developed by established community builders, Lifetime Developments. The company, which started off by establishing single-family residences in the suburbs of the Greater Toronto Area, has been making their mark in the competitive condominium development scene ever since they decided to leave the suburbs due to greenbelt land restriction. Currently, Lifetime Developments is recognized as one of Toronto’s Top developers, due to its’ ability to produce stunning, one of a kind condominiums; such as Whitehaus Condos.

The interior of the building was designed by Toronto’s award-winning interior design company, Cecconi Simone. This company, which came on the scene in  1982, has grown throughout the years and currently hosts 40 administrative, technical, and professional members of staff, who are all devoted to providing quality interior designs. They have designed the interior of many hotels, residential buildings, and commercial buildings around the world. Currently, they have developed over 70 projects in Toronto alone.

Almost up for occupation, the 29 storey building with 358 exquisite suites has something on offer for everyone. Whitehaus Condos are situated at 2360 Yonge Street in Toronto. Developed by Lifetime Developments along with Knightstone Capital Management Inc. provide entertainment and luxury in full flow. To provide full entertainment to the residents, there is an art studio, gym, pool and a spacious outdoor. The place has a spa for dogs as well along with private rooms to pamper them. The place provides sufficient options for families with schooling options such as Junior Public, Hansa Language Center and much more in close proximity.