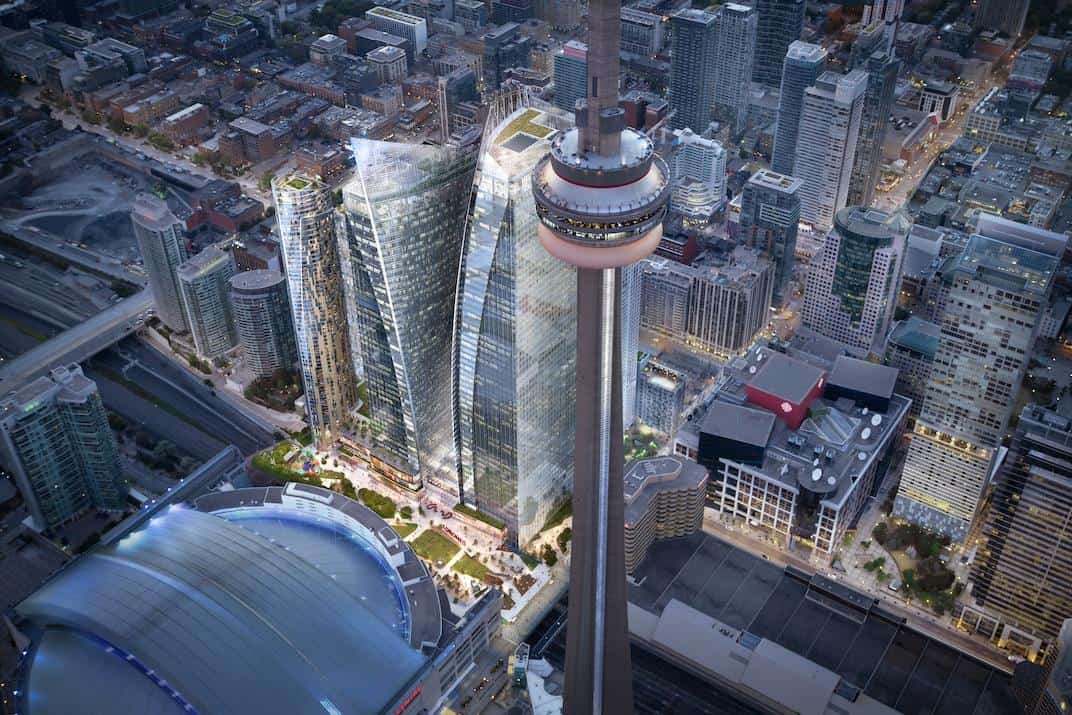 Union Park is a major upcoming condo development that is located at 211 Front Street West. The pre-construction condo will have a total of 4 buildings which will be completed for $3.5 billion. The developer of the project is Oxford Properties, and the designing aspect is in the hands of Pelli Clarke Pelli Architects and Adamson Associates Architects. The development will span over an area of 4.3 million square foot, which will cater to several residential, retail, and office activities.

This mixed-use complex will be developed on an area of 4 acres, making it perfect for a Downtown Toronto condo project. Previously, the developers had plans of building a 6 tower complex which was in collaboration with Foster + Partners. The new plans are finalized, and the project is expected to start by 2023. Explore the features and benefits of Union Park Condos, which will feature 800 residential units.

The project upon completion will be the largest development in the history of Canada. Oxford Properties plan to change the downtown core for the coming decade with this development. Union Park Condos will feature 4 buildings. One of the buildings will feature 48 stories, whereas the tallest building will have 58 stories. The buildings will be touching the skyline of Toronto and provide its residents with some breathtaking views. These two buildings will cover the larger project of the entire development with a total of 3.3 million square feet of office space between the two towers.

This Toronto condo development is proposed to have a total of 800 residential units, which will provide the residents with luxurious amenities and a complete lifestyle. The other two buildings will have 44 and 54 stories. This will feature a retail space of 200,000 square feet. The development will have one, two, and three-bedroom units and will also include an integrated day-care unit on-site.

Union Park, which will soon be the largest redevelopment project in North America and the largest in the history of Toronto, will feature some of the best architecture from globally-renowned teams. This development will help in creating a progressive community and workplace for all the residents of Toronto.

The development is planned for the location between John Street and Blue Jays Way. Current plans in the development include a new two-acre public space. Union Park Condos will be located near the Round House Park and Cherry Hill Park. Located in the neighborhood of the Entertainment District, Union Park Condos provide the residents with a stunning location and views from these high towers.

The location will provide the residents with several daily necessities as well as all the luxuries and amenities that one requires. There are several retail shops and services. Residents can find everything within a few minutes from the condos. Nearby supermarkets include Rogers, Metro, Rabba Fine Foods, INS Market, and much more. Residents will be able to find the best of the products and all the groceries and household items at these supermarkets.

There are several open places for future residents at Union Park. Nearby parks include Simcoe Park, Roundhouse Park, Berczy Park, and Harbour Square Park. Residents will be able to spend quality time and enjoy in these open spaces. Along with open spaces, kids at Union Park will also have access to the best of the educational institutes. The neighborhood has schools like The Waterfront School, Wilfrid Laurier University, Ogden Junior Public School, and Beverley School.

The location is right next to Union Station, which will provide easy access to public transportation. The Bloor GO Station is also at a distance of 10 minutes via vehicle. Residents will not face issues in traveling to different parts of Toronto. Motorists at Union Park will have access to the Gardiner Expressway which can take them around the Greater Toronto Area without any hassles.

Some of the best restaurants around the region include Cora, Wahlburgers Toronto, St. Louis Bar and Grill, The Loose Moose, Boston Pizza and many more. Residents can have access to cuisines from all around the globe with these restaurants.

Oxford Properties is a renowned name in the real estate industry not just in Toronto but all across the globe. It was in the year 1960 when Oxford Properties was established in Alberta. Initially, when they started as a small firm, they dealt with customers and helped them invest, finance as well as build medical clinics. However, today, they are amongst the biggest firms and have massive assets in the States, the whole of Canada and Europe. The pre-condos developed by them are true state-of-the-art projects that are highly appreciated and have great market value in the industry. They keep a practical approach to the development of their projects and keep a bigger picture in mind while starting with their work. They know how to offer fineness in their developments for the luxury experience of their customers. Yorkdale mall is amongst their most famous projects to date.