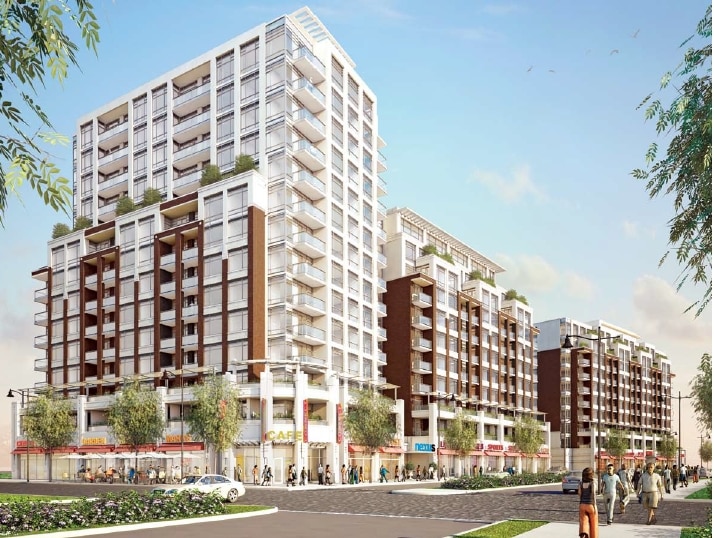 Enticing the eyes of those who enter the Nexus South condo structure is a welcoming lobby equipped with a fireplace creating a warm atmosphere. A truly inviting ambiance awaits the residents of this 14-story, 226-unit structure at Enterprise is the twin tower of the Nexus South condos. This is a mixed-use project at Downtown Markham.

The ground floor is allotted for retail while the second floor is a bridge adjoining the two buildings. The Nexus South Condominiums take pride in taking after the first phase’s being LEED compliant.

Amenities of the Nexus South Condominium include around-the-clock concierge. The bridge connecting the Nexus North and South will lead residents to the Maxim Club Spa. This club, which was based on the principle of the condominium that the occupants deserve only the best, features a spa, an infinity-edge whirlpool, and a sauna. Residents will get to enjoy the facility more as it enables one to look at what the picturesque town brings.

On the tenth floor of Nexus South are the spacious two-story units. A rooftop terrace, designed with a garden, will welcome residents who want to enjoy the view the city has to bring. On the 11th floor is where some of the building’s amenities will be situated. These include the party room, gym, media room, and games room.

Nexus South Condo is developed by the Remington group, the same group who put up the Luna Towns on Dufferin Street and Rutherford Road, IQ Condos in Islington Avenue, The Benchmark Towns in Enterprise Boulevard, The Signature Condos on Birchmount Road, York Condos on Highway 7, The Verdale in Warden, and Rougue Bijou at Enterprise. The same developer also did the Nexus North Condos. The condominium is designed by Quadrangle Architects Limited.

Nexus South Condos is an upcoming project by the renowned Remington Developers. The project is a sheer example of modern architecture laced with luxury and its eye-catching facade. The much-awaited sanctuary provides an urban vibe through the lined-up facilities and multiple markets and clubs situated in the vibrant neighborhood of Markham. The interiors are well designed and come with a gourmet kitchen along with spacious well-furnished rooms to offer nothing but comfort to the residents. The amenities offered include a fitness center, patios with BBQ and seating arrangements, concierge services, luxury lounges, etc. The vicinity is well accessible on foot as well as through numerous transit options available conveniently. The only con of the place is the high maintenance cost that could burn a hole in the pocket.