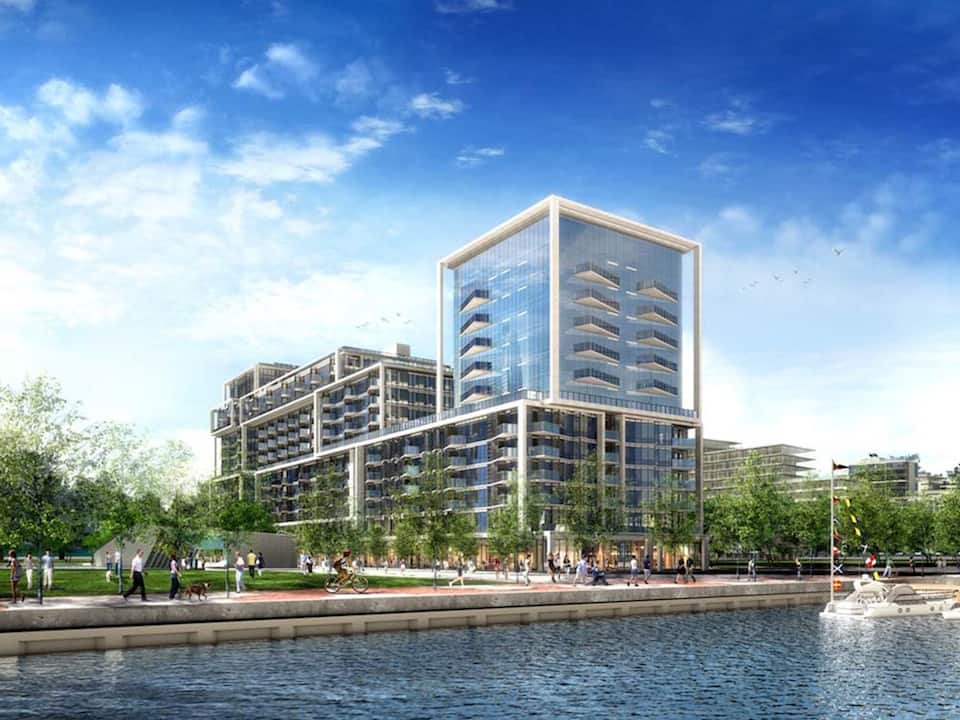 Aqualina at Bayside is a condo development by Tridel, located at 261 Queens Quay E, Toronto, ON.  The building was completed in 2017 with a total of 363 residential units. This mixed-use development of $1.1 billion is right on the Waterfront in Downtown Toronto. Aqualina at Bayside is at a location that is admired by plenty of residents due to the stunning location and breathtaking views.

The two million square feet of space is being used for commercial, cultural, and residential purposes. Developed by one of the leading developers in Canada, Aqualina at Bayside follows a master-planned approach to the development with an ideal location and several amenities. The condo development has several world-class transportation facilities around the region, which will provide an easy commute to all the major spots around Toronto. Explore the luxurious life at Aqualina at Bayside.

The building is formed in a series of prismatic blocks which are stacked over one another and right next to each other which looks like it is descending towards the lake. Units will have windows and balconies, which will maximize the waterfront as well as the city view. There is a shimmering glass cube which begins on the 7th level terrace. It is the closest to the lake and has Penthouses and Premium Signature Collection Suites.

Aqualina at Bayside is definitely becoming one of the premier waterfront address in Toronto. The condo development has an exceptional array of amenities on the lower floors of the building. There are spaces for entertainment as well as a fitness center. The terrace of the building on the 13th floor has an indoor lounge, BBQ dining area, sundeck lounge areas, along with a stunning outdoor infinity pool which will provide some of the best views of the city and lake. The other facilities include 24-hour security, party room, gym, billiard room and much more. Living at Aqualina at Bayside, no resident will feel anything less than living in a luxury resort. The development has everything that a resident requires and can dream of.

Aqualina at Bayside is located in one of the prime locations of the city. The walk score of the area is 71, which means that most of the errands can be covered on foot. Aqualina at Bayside will definitely soon be one of the premier water edge community providing the residents with utmost luxury and comfort at home. The condos are located south of Queens Quay and between the Parliament Street in the east and Lower Sherbourne Street in the west.

The location features plenty of open spaces in the neighborhood. Nearby parks include Harbour Square Park, Water’s Edge Promenade, Sherbourne Common, Sugar Beach Park, and HTO Park. Residents can relax and enjoy with friends and family, and kids can play during the evening in these open spaces around the region. The place also has several supermarkets, grocery stores, and other retail shops and services that are required on a day to day basis.

Residents can enjoy cuisines from all around the globe at the nearby restaurants. These include Miku Toronto, Mom, and Pops, Against the Grain, Alexandros Take-Out, ARDO Restaurant, Patrician Grill, and plenty more. Living at Queens Quay East, residents have some stunning views along with all their basic requirements.

The location of Aqualina at Bayside has a transit score of 94. Residents can travel to all the major spots around the Greater Toronto Area without any hassle. The GO Transit Station of Dan Yard is at a walking distance. The station will provide an easy commute to all the major lines of Toronto. Residents with vehicles will also have to be able to access the Gardiner Expressway with ease. Via the Gardiner Expressway, residents can also access the Highway 427. With plenty of world-class transportation options, no resident is ever going to face any issue.

Some of their popular developments include Accolade, Lakeview Village Condos, 10 Bellair, The Well Condos, Edenbridge Kingsway, and 119 Denison Ave. Hines is a multinational investment company that has won several accolades from their work in the real estate industry. Some of their previous developments include AVIVA Coral Gables, The Residencies at CityCentre, and Fuse.